Flooding can happen whenever flowing water surpasses its bank full stage and eventually inundate the surrounding adjacent areas. These may perhaps take place during the course of intense rainfalls and when a significant amount of snow melts. In conjunction with inundation, the increase of flow velocity may possibly erode and cause damage to fragile riverbanks resulting in more devastating damages. For this reason, it is best to consider proper protection measures along the vulnerable banks before the arrival of extreme flows.

Along the river Aire, many stabilization measures exist. For instance, one can see biological or organic protection as a measure to protect further degradation of banks. Moreover, certain gabion protections exist. Nevertheless, there are still spots where bank stabilization is needed. As it is pointed out in Figures 5 and 6, river-bank curvatures are prone to erosion and require protection. Construction of levees, temporary or provisional flood storage basins, and sometimes elevating the village above the flood line are some of the precautions that need to be implemented to alleviate future potential mishaps.

The river Aire originates at the outskirts of the villages of Presilly, Beaumont, and Feigéres in France. The diverse branches of the watercourse confluence at the small town referred as St Julien en Genevois then simply carries on flowing in the direction of Geneva city, traversing along with the parts of the city that includes Confignon, Lancy. Eventually, the river unites with another river known as L’Arve right underneath the Saint-Georges Bridge.  The origins and the course of the river are shown below in figures 1, 2, and 3. 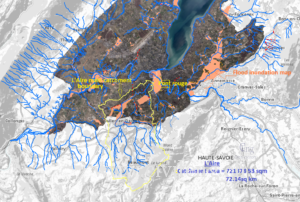 Figure 1 Catchment and watercourse of L’Aire 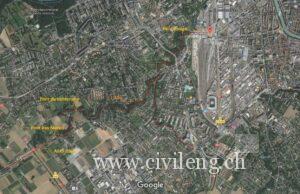 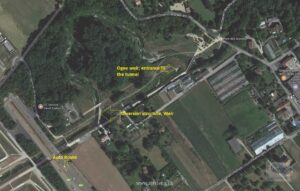 Figures 4, 5, and 6 demonstrate the representation of banks along the given reach 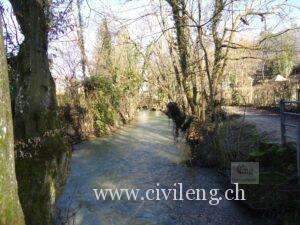 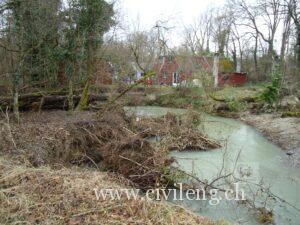 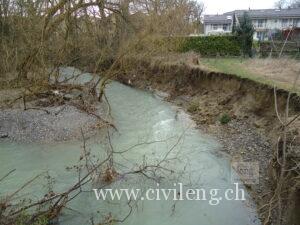 To run the HEC-RAS model, both cross-sectional and hydrological data were provided. However, there was no description of the origin of the data. No information was given whether the data was a recollect of surveying data or ArcGIS extraction or any other software product.  Certain cross-sections were modified. Therefore, corrections, as needed, were made in order to run the model. The overall length of the reach considered in this analysis was 5363.91 ms. On average there was a 23.5ms distance in between the cross-sections.  There are five bridges along the reach. The central waterway had cobbles and roughly 70% of the right and the left bank had vegetation covers as shown in Figures 7 and 8. Consequently, the roughness coefficient assumed to be 0.05 and 0.1 for the beds and for the banks respectively. Besides, there were lateral concrete structures and tributaries along the stream. The flow fluctuates along the river and supplementary lateral flows pointed out at around 1690m of the downstream of the river. Flows for the given recurrence time periods are contained in Table 1.

Figures 7 and 8 indicate representation of the  riverbed, the right and the left banks of the river 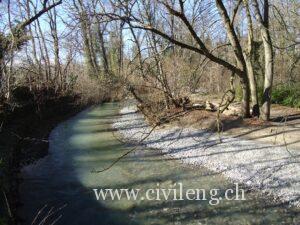 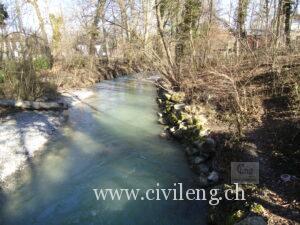 The following Figures 9, 10, 11 show the result of the analysis in images. 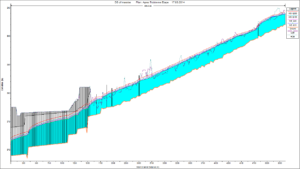 Figure 9 Longitudinal profile of the river for each return periods 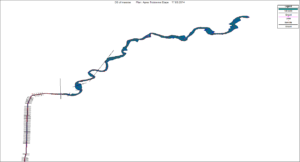 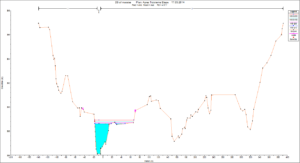 The provided flow data for 100 years of return period at Pont des Marais and at Pont Rouge equals 39 Cumec and 48 Cumec respectively. The HEC-RAS simulated velocities along the river are in the range of 0.63 – 3.95 m/s. In this regard, It is important to check out particularly the higher velocities mainly because the rise in velocity along the channel may easily erode the banks. 3m/s velocity has the ability to erode natural ground and can carry even bigger objects along its path. For instance, throughout the regular flow periods, the velocity at Pont du Centenaire is about 0.25m/s for a discharge of 0.745Cumec. This velocity is much less than the scouring velocity. Nevertheless, 39 Cumec discharge is capable of generating a somewhat higher flow velocity in the channel causing erosion along the banks. As a result of higher flows such as Q100 and Q300, overflowing and inundation may occur. Therefore,  precautionary measures are necessary to have a certain kinds of protection from potential future damages.

As the highest possible discharge that can be taken care of at the Pont Rouge (tunnel entrance) is 60 Cumec, lowering the discharge below 60 Cumec is essential. The new construction work of the diversion structure reduced effectively the amount of discharge at the Pont Rouge. The result of this HEC-RAS analysis has also demonstrated the same.

Once the banks are eroded the water gets an easy way to spread out over the banks inundating the village and the surrounding vicinity, particularly the left and right side of the bank where there exist adjacent dwelling premises. Subsequently, precautionary measures such as a gabion wall or concrete retaining wall assist to offer protection to the banks throughout the flooding periods. Moreover, the inundation of the village can also be eliminated by setting up temporary detention basins at the upstream side of the river. Temporary detention dam contributes greatly to reduce the possible hazard of future harm to the downstream villagers.

Other useful videos can also be accessed at this link

We use cookies on our website to give you the most relevant experience by remembering your preferences and repeat visits. By clicking “Accept All”, you consent to the use of ALL the cookies. However, you may visit "Cookie Settings" to provide a controlled consent.
Cookie SettingsAccept All
Manage consent

This website uses cookies to improve your experience while you navigate through the website. Out of these, the cookies that are categorized as necessary are stored on your browser as they are essential for the working of basic functionalities of the website. We also use third-party cookies that help us analyze and understand how you use this website. These cookies will be stored in your browser only with your consent. You also have the option to opt-out of these cookies. But opting out of some of these cookies may affect your browsing experience.
Necessary Always Enabled
Necessary cookies are absolutely essential for the website to function properly. This category only includes cookies that ensures basic functionalities and security features of the website. These cookies do not store any personal information.
Non-necessary
Any cookies that may not be particularly necessary for the website to function and is used specifically to collect user personal data via analytics, ads, other embedded contents are termed as non-necessary cookies. It is mandatory to procure user consent prior to running these cookies on your website.
SAVE & ACCEPT